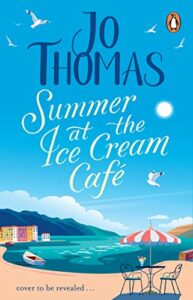 ‘Phfffff! Books!’ says the removal man, with a puff, a grunt, and a girding of his loins. ‘Where do you want these, love?’ He’s lifting the heavy crate.

‘Oh, anywhere!’ I say. I haven’t planned this at all. I certainly hadn’t planned to move on the hottest day of the year so far at the end of June. But that is the great thing about leaping through a window of opportunity. Nothing is planned! And, right now, that feels wonderful! Except the books. I’ll read them all now, I promise myself.

The removal-truck doors are wide open on the track beside the house. The whole world can see my belongings. It’s like walking in and introducing yourself at a party completely naked! They’ve seen everything about you before you’ve even had a chance to say, ‘Hello, nice to meet you.’

There’s the smart gold-and-red-striped three-piece suite I bought when I could finally afford to walk into the showroom, turn down the monthly-repayment scheme and offer to settle up with cash. That was a day, I think. That’s when I knew life was on the up.

Then there’s the exercise bike I bought during lockdown, hoping to relieve some tension in the house and thinking it was time I got my body into shape: Josh had stopped looking at me, and once I started dating, I decided it would help. It didn’t. The huge bouncy ball I sat on to keep myself moving at my office desk – it took up the spare room – makes a bid for escape out of the van. It rolls down the ramp, along the track and bounces across the main road, coming to a standstill by a group of locals beside a muddy tractor. Lexie, the removal woman, marches across the road in her steel-toe-capped boots, leopard-print leggings and short-sleeved polo shirt, company name on the breast, to retrieve it. Much to my relief I didn’t have to. I’ll introduce myself to the onlookers when I’m ready.

Lexie’s dad is pulling out more boxes of hardback books, mostly on cookery, which I buy but never have time to read.

And there it is, centre stage, right in the middle of the removal van: the huge, battered pine kitchen table that had belonged to my grandparents. I refused to get rid of it after they died. This was where family life had taken place while I was growing up, round that table. Josh and I had bought our flat because it had a big enough kitchen to take the table. Just. The removal company were cursing me, I’m sure, getting the table into the flat and, by the sound of it, getting it out again. In this house, there is plenty of room for it in the kitchen.

I turn and stare at the house. I can’t believe it’s mine. I’ve always loved it, wondering what it would be like to live in it, to look right out to sea from the back garden. I’m sad for the people who had to sell it. It had been in their family for years and inheritance tax had made it impossible for the next generation to stay on. But at least they know it’s gone to someone who loves it. I can’t wait to get everything in and shut the door. But for now I’m still on full display, as if the travelling circus has arrived in town.

I hear another tractor pull up outside and stop. The chug-chug-chug of the engine cuts out.

And the small gathering – two tractor drivers, Carys, an older woman I recognize straight away with two fidgeting Jack Russells, the window-cleaner, with his brush on a pole, and the postman, handing out mail to the group – loiters on the other side of the road, watching the removal van with interest. I’m standing just out of sight, under the shade of a larch tree hanging over the gateway.

‘It’s a bad business all this,’ Dewi Roberts says, climbing down from the cab of the tractor. He’s barely changed, and neither has Carys. I smile, watching them from the shade of the tree.

The others shake their heads.

‘Must have gone for a fortune!’

‘All that money and gone on tax!’

They shake their heads again.

‘You’d think the old man would have thought of it, passed it on before he died.’

‘So sad. That family’s been there for generations. Now all the money’s gone.’

‘It went on sale on the Friday, gone by the Monday morning. I heard buyers from London were calling and bidding on it, cash buyers. Buying it unseen!’

I cringe a little.

‘They’re in pretty quick. Done and dusted within weeks.’

‘Who’d buy a house they hadn’t even seen?’

‘I heard it went over the asking price. Ordinary folk didn’t get a look in.’

‘They should have sold to locals.’

‘It’s hard when rich families from London are offering you cash.’

‘Without even coming to view it.’

‘Second- home owners, are they?’ Lloyd Owen, the other tractor driver, asks, watching my kitchen chairs and, in particular, the big old pine carver with the familiar worn cushion tied to its seat and a bag of bedding being removed from the van. ‘Looks like posh stuff.’

‘Could be a holiday-rental property.’

‘Not with an old pine chair and table like that,’ says Carys. ‘Looks like it’s come from a second-handshop.’

I don’t know whether to feel affronted or giggle.

The speculation continues. I’m finding it half cringeworthy and half funny. But at the same time, I can’t help but chuckle about the ‘table like that’ finally coming home to Swn Y Mor.

‘Are you the new owner?’ Dewi calls to the removal man across the road, over the cars with roof boxes, camper-vans and caravans heading along the coast.

He shakes his head.

‘Only I wanted a word about renting some land,’ Dewi continues. ‘I have a proposition,’ he says, walking across the road, nearly stepping out in front of a group of bikers, who manage to swerve and miss him.

I bet he does. He probably reckons the new owner knows nothing about how things work around here. Then I take a deep breath, glance back at the house – my house – and step out of the shadows of the larch.

‘In that case, you’re looking for me. I’m the new owner,’ I say, coming to stand in front of the open doors at the end of the van. ‘And, no, it’s not a second home or a holiday rental.’

The group are silenced and puzzled.

‘Don’t tell me you’re going to knock it down and put up gerts, or whatever those tent things are called!’ says Carys, with a scowl.

‘They’ll take off from that headland in a brisk wind!’ says the postie, who I recognize as Thomas Pritchard from school. ‘We get a lot of wind here. Hot air, y’see. From the Gulf Stream.’

‘It’s okay. I know what it’s like,’ I say, holding up a hand. ‘But I’m not putting up yurts.’ It’s not a bad idea. But I’m not here to build a new business, far from it. I have other plans. I have everything I need, if I’m careful, enough to live on, and that’s all I want right now. I’m not planning any more businesses. I’ve had quite enough of that.

‘Well, what are you going to do with it?’ says Lloyd, looking confused.

I take a deep breath. ‘I’m going to live in it,’ I say, and watch their faces. Their expressions change from surprise, to curiosity, to raised eyebrows.

‘With your family?’ asks Carys.

‘Just me,’ I confirm, excitement growing.

‘What? You bought this on your own?’ says Carys, incredulously.

I sigh. Next they’ll be asking how much I earn each year and to see my bank statements. ‘Yes, I bought it. On my own,’ I say firmly, finishing the conversation.

‘In that case, could I have a word about renting your land? I’ll give you a good price,’ says Dewi.

‘I’m sure,’ I say, and laugh, which feels good. ‘Like you offer all the newcomers around here. Don’t think I don’t know your tricks.’

The two farmers look at each other, then back at me. And suddenly I feel my past and present collide.

‘Do I know you?’ asks Lloyd, narrowing his eyes. The past twenty years haven’t been kind to him. I remind myself that Lloyd Owen has always looked like an old man. I don’t remember him not wearing wellingtons and a battered old fluorescent coat with string tumbling from the pockets.

I decide to put them out of their misery. ‘I’m Beca, Beca Valentino, from Valentino’s Gelateria, and, yes, I’m back to live here,’ I say. ‘Yes, I’m on my own and, no, I’m not doing yurts. Now, if you have all the information you need, I’m going to get on. Oh, and if you’re thinking of making me an offer to rent my land, double it. I know the price of land rental around here.’ I pick up a side table. They have all I’m prepared to tell them, for now.

‘Thought she was in America.’

‘I thought she died.’

‘Where’s she got that kind of money from, then?’

‘Not from her family.’

‘What she’s doing back here, buying this place?’

I can still hear them as I’m walking up the driveway and the path towards the house. I look at the porch with its stained-glass window lit brightly in the warm sunshine and hear the seagulls calling overhead. I take in the long leaded windows on either side of the front door and the two smaller ones at roof level, equally distanced between the chimneystacks. And beyond the house, the green grass of the Pembrokeshire headland, overlooking sparkling blue sea, separating this west Wales coastline from Ireland, dotted with sailing boats enjoying the sea breeze. This place. It isn’t love at first sight, because I’ve loved this house all my life. I didn’t need to come and view it. It’s exactly where I’m meant to be right now.

‘It’s a lot of rooms for just one person,’ I hear someone call after me.

And I can’t resist: I turn back to the group from beneath the neglected arbour with a rampant rambling rose over it. ‘I have plans, Dewi Roberts, big plans,’ I call back to the gossiping farmers, as I walk the last bit of the path, a thorn from the overgrown rose snagging at my top. Pruning it will be one of my first jobs. And despite the aches of packing and moving, the weeks of keeping the cleaning business going with absent staff, doing shifts myself so I could hand over the business to Maria, there’s a swing in my stride and a spring in my step. In no time at all everyone will know who’s bought Ty Mawr. Word of mouth. It’s the one thing I couldn’t stand when I left this place. But right now, if they want to gossip, let them. I breathe in the salty sea air. I’m back, I have plans, and this time they don’t involve business.